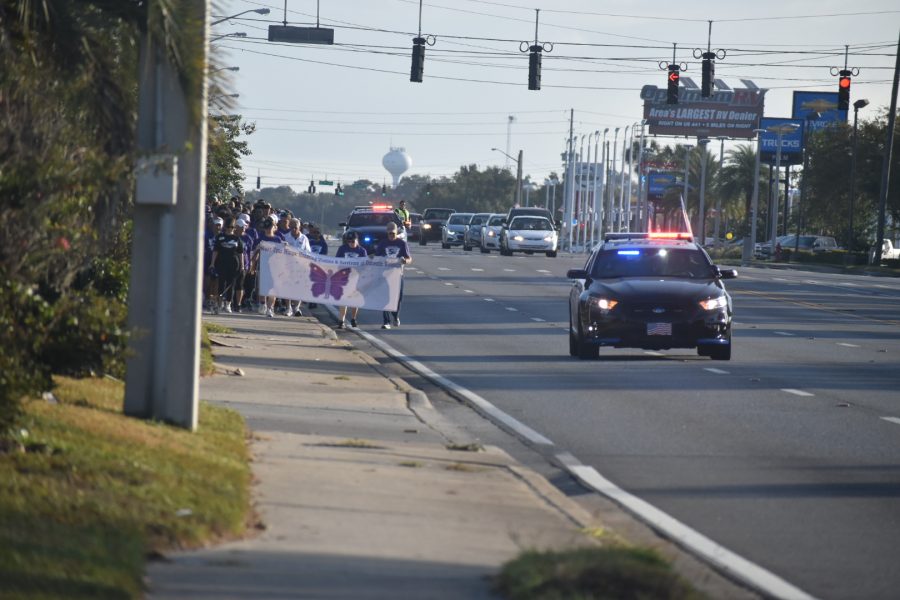 Emotions flooded many as they gathered on October 5, 2019 for the Annual Wear Your Wings Domestic Violence walk. Wings were spread and hearts were lifted as supporters and overcomers walk down a road the many travel daily to get to school.

The Wear Your Wings Domestic Violence Walk all started six years ago when Monica Bryant, Family Violence Prevention Coordinator for Marion County Children’s Alliance, seen a lack in the community for resources and awareness of domestic violence.

“We noticed that there was a walk-in this community for everything else except domestic violence. So we actually started our walk,” said Bryant.

This walk was not just any walk. The route of the walk hits home for many at CF and in the community. This walk was from the Ocala Police Department headquarters to CF. This was the same route that CF Professor Debra Vazquez used to try to escape from her estranged ex-husband who ultimately killed her and himself.

“The route is 3.1 miles, which is a 5k if people wanted to run but we just do the walk. Not only in memory of Debra Vazquez but in memory of all of our victims,” said Bryant.

Debra was an award-winning English faculty member loved by her students. Many would describe her as creative, encouraging, and engaging. Many were surprised to hear of her passing and even to know that she was experiencing domestic violence.

“I think the most important message here is that you often don’t know what walk someone is having. She would want people to be in tune and sensitive, to speak their truth and to be present for one another,” said Karla Wilson, implementation director at CF.

Many people don’t think about these issues until they are faced with it. Events like these give voices to survivors and victims to know they are not alone, because this is an issue that affects many in our community.

“In 2018, there were 3,481 reported domestic violence offenses in Marion County alone. And in Florida, there were 104,914 and those were just the ones reported. Think about the many that go unreported,” said Dr. James Henningsen, president of CF.

It is important to know that our community is working on the problem and not “putting a Band-Aid over it,” as Beth McCall, executive director of Marion County Children Alliance said. The Family Violence Prevention Taskforce has made partnerships to find root causes, look at demographics and come up with viable solutions to put an end to this ongoing problem.

This is on top of the work that has been done last year also. In 2018, the task force raised $41,000 and served 200 families. $19,000 was used to place families in emergency shelters. $22,000 helped families of domestic violence with gas, transportation, food, clothing, utilities, etc. The task force has worked tirelessly to bring solutions to the problems that Marion County faces.

Gisele Soetebeer learned about the walkthrough of her sociology class at CF. Although she has never experienced domestic violence she wanted to show support for victims and bring awareness to this issue. From the speakers and the experience of talking to victims, she learned a lot.

“I learned that it is important for everybody to know that they’re worth it. You don’t have to stay with somebody because you’re in love with them. Love is a powerful thing but can sometimes be very misleading.”

Jeanne Henningsen, keynote speaker and founder of Ignite, domestic violence, and sexual assault center. She talked about her own battle with domestic violence how it affected not only her but her family, friends, and work also. She spoke about her process of overcoming and how it was hard but so worth it. She encourages many survivors in the audience to keep going.

“Now I’m proud of all of you for being here. I’m glad you wore your wings. And I want to encourage you, wherever you are in your journey, whether it’s you, or you’re walking for someone you love today. Wear your wings every day and continue to move forward. Even if it’s just the tiniest little step, continue to move forward. I encourage you to stay strong and live the purpose that God has intended you to live,” said Henningsen.