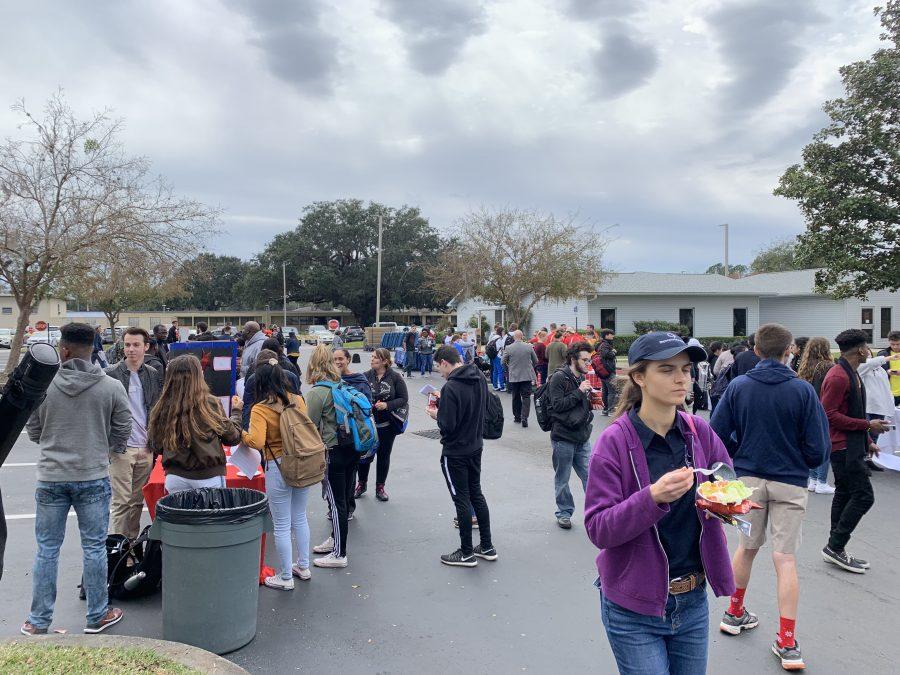 Just a small view of the crowd from Club Rush on the Ocala Campus on Wednesday, January 16, 2018.

Dozens of students and faculty members joined together on a chilly Wednesday afternoon in between The Veterans Center and The Social Sciences building to present their clubs and organizations to future members. Organizations ranged from honor societies to social clubs and hands-on clubs.

Students also got to participate in hands-on projects that some of the clubs were doing, like the Physical Therapist Assistant Club. They connected a device to a student’s arm and used the devices electric currents to stimulate the arms muscles and this gave the students an inside look on what it’s like if you’re an athlete with a sprained muscle.

However, the president of the Student Activities Board, Emmirial Griner, stated that “the club rush last year had a lot more people due to the weather, but this year we have a lot more clubs compared to last year.”

While the weather may have driven students to the comfort of a Florida fireplace, that still didn’t stop some students from exploring the many opportunities that the clubs offered.

“I think that Club Rush is really fun, and you get to know the student life and what goes on around the school,” says Riley Henry at her first Club Rush.

Club Rush had more space for activities and events that each club could do, this allowed students more breathing room when going to different booths.

For students looking to earn scholarships, the Honors Institute is one of the clubs that do just that.

Then there is the oldest club on campus; The Psychological Rehabilitation Education Program (PREP). Clubs such as PREP help students with psychological challenges achieve their academic or vocational goals. Not to mention they also participate in the international food contest.

CF offers a Student Ambassador organization that strives to create a positive image of the college through student outreach and service. The ambassadors are also the official representatives of the college. They have the opportunity to work on campus and community events such as the Presidents Party. Here, students can gain business experience and essential life skills in communications and public relations.

For those that love dealing with technology, there’s the Digital Media Club that allows students to make technology and video games, also you get to use a 3-D printer to make projects as well.

“We have a sound booth in the Webber building to do projects on and it’s a club for anyone interested in making hands-on projects,” stated Eleana Iriarte, who is the Secretary of the Treasury for the club.

Diversity is also well represented at the college with clubs like African-American Student Union (AASU) which is a club that reinforces and celebrates the African-American heritage and culture. There’s also the Gay Straight Alliance club (GSA) that is dedicated to providing a safe space for LGBTQ+ people and their allies.

Now to those that happen to love dancing, don’t worry, The Salsa Mix Club promotes the interest of Latin music at CF, individually and as a group. This is a club that helps provide a better understanding between American and foreign cultures through social interaction and dance presentations.

“In the next couple of semesters, I think we should get more marketing and reach more social platforms to get in touch with more students and also better weather,” said Griner.

As another Club Rush came to an end, students were able to discover and explore the many opportunities that the College of Central Florida has to offer. The next club rush won’t be until the Fall semester of 2019, For more information on the clubs that CF has to offer, visit the CF website: www.cf.edu/studentlife