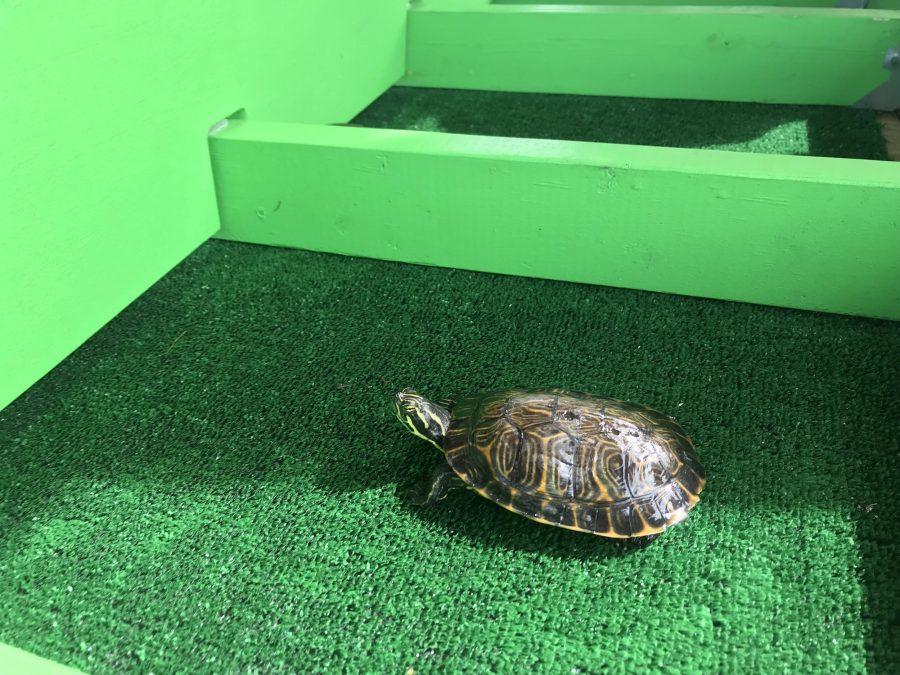 Volunteers from Citrus High School’s Key Club host the Cooter Races, this cooter, in lane one, won first place in their heat.

Starting on Friday Oct. 26th and going throughout the weekend until Sunday Oct. 28th, downtown Inverness was taken over by The Cooter Festival.
Being a stable of Citrus County; The Cooter Festival is held during the last weekend of October every year since 2004. The Cooter Festival has evolved throughout the years from having strictly cooter related activities, to becoming a full weekend of bands, water shows, a carnival, a cooter zombie run, a ‘cooterween’ costume contest, and a laser show.
The Cooter Festival has always been surrounded with controversy, as featured in the Daily Show in 2004, Ed Helms, from The Daily Show and best known for his roles in The Hangover and in The Office, took to the streets and interviewed some Citrus County locals in a piece on the Cooter Festival.
“My friends have always talked about the Cooter Festival and we missed it last year and we had to come this year,” Noah Millison said. Millison, who is a University of Florida student, traveled from Gainesville with six of her friends to see everything the Cooter Festival had to offer, and to see if it lived up to the hype.
Millison explained that her favorite part of the festival was all the cooter t-shirts that were being sold. Millison’s shirt that she bought said “The Cooter Nation” while her friends bought matching shirts which said “Save A Fish and Eat A Cooter”.
There was a wide variety of booths that were featured during the three days of the Cooter Festival. Many of the booths were run by local organizations which featured items such as essential oils, steampunk fashion, and everything in between.
After browsing all of the vendors, Cooter Festival attendees could visit that long row of food trucks and eat while listening to some of the bands that performed all throughout the weekend.
The majority of the bands that were featured this year were tribute bands bringing a very Woodstock vibe to the festival. These bands included: Guns 4 Roses, Groove 41, Jo Jo Jonas Band, and Yachta Yachta Yachta

.
“Every year [the Cooter Festival] gets a little bigger and a little better,” Alex Calderone said. “I’ve never had this much responsibilities at any of the other festivals so I was really excited.” Calderone could have been seen by the stage that was set up at the center of the park working with the bands on mixing the audio board and making sure everything was running smoothly.
One of the main events of the weekend was the water show on Lake Henderson presented by Nick Nicholas Ford. Spanning the two parks, Liberty and Wallace Brookes, guests could see water skiers perform a wide variety of tricks that had the audience in awe.
“[The water show] was crazy. I couldn’t believe that I saw all the flips and tricks with my own eyes,” Rylee Vazquez said. “That had to be my favorite part of the whole festival because I’ve never seen that kind of thing before.”
The14th annual Cooter Festival was yet another hit with weather that kept everyone nice and cool. Next year, the 15th annual Cooter Festival will most likely be held at the upgraded Liberty and Wallace Brookes parks. Construction on the parks is expected to begin within the next month and will last for the next 11 months.

Story and photos by Kevin Flaherty