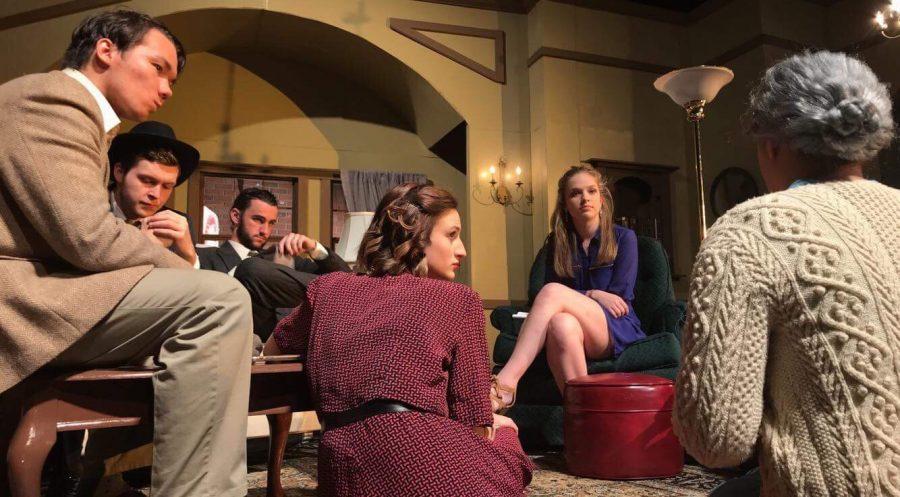 Yeah The CF theatre performed “Lost in Yonkers” on March 8 and 10 in the Dassance Fine Arts Center. “Lost in Yonkers” takes place in 1942 Yonkers, New York in an apartment above Kurnitz’s Kandy Store. While comedic, the cast portrayed the emotional strain in the family life as WWII is going on.
Eddie, played by Dylan Thomas Coulson, must leave his two sons, Jay and Arty, at his mother’s house for 10 months as he goes away for work to repay an enormous debt. Coulson describes his character as “a deeply troubled individual”.
“His issue is that he’s in a situation where now he cannot provide for his own children because of his own debt,” said Coulson, who is studying theatre at CF. “So, he has to find a way somehow to convince his mother to take them in as he goes away for months and months on end.” 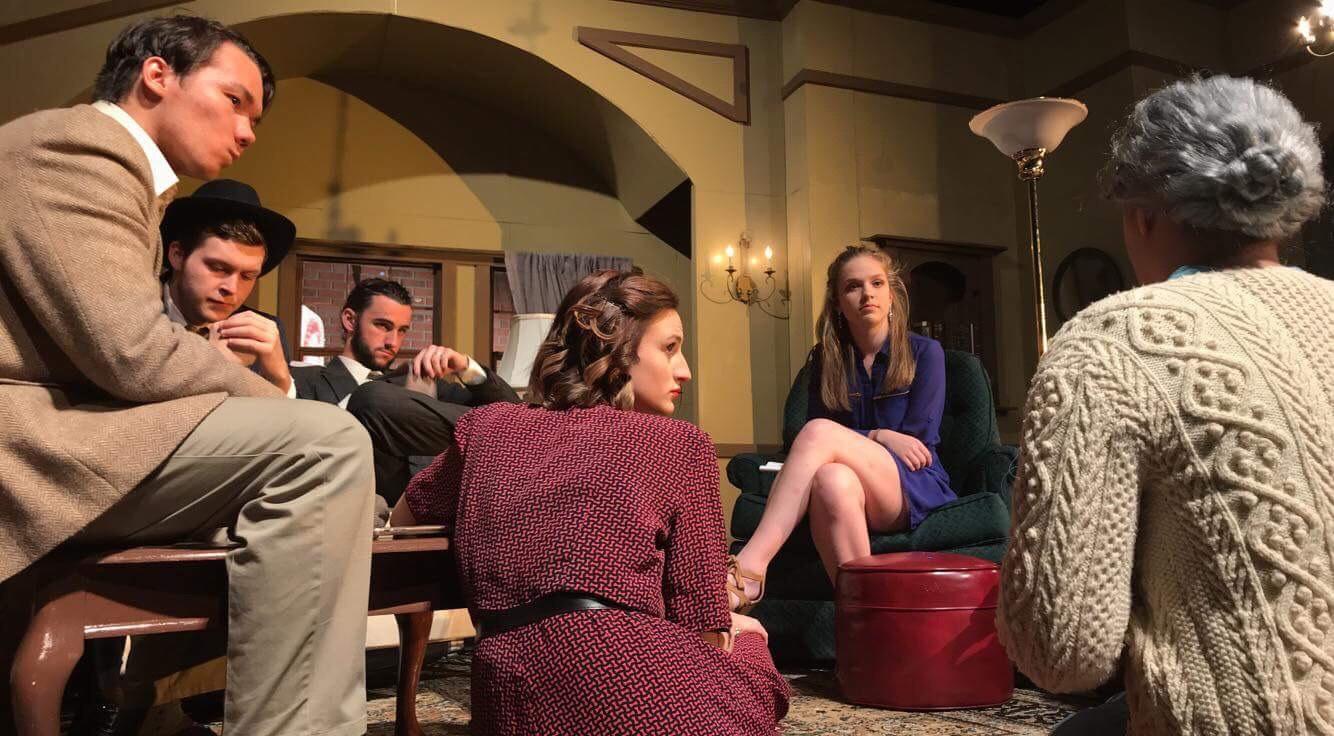 Jay and Arty, played by Bernard Acosta and Landon Williams, are both pubescent boys that are afraid of Grandma and don’t want to stay with her while their father is gone. As the 10 months progress, they learn the hard lessons from Grandma and their Uncle Louie, who is played by Justin Heath.
“In the beginning, he’s really worried, but tries to act like his dad because he’s really scared,” said Acosta, who is studying theatre at CF. “He kind of has a turning point when he finally stands up for himself against Louie, and that’s where the biggest growth part is.”
Williams, who is studying theatre at CF, would describe his character as “the person who says what everyone is thinking.” Which is accurate, as 13 and a half-year-old Arty speaks his mind multiple times throughout the show, even standing up to Grandma. 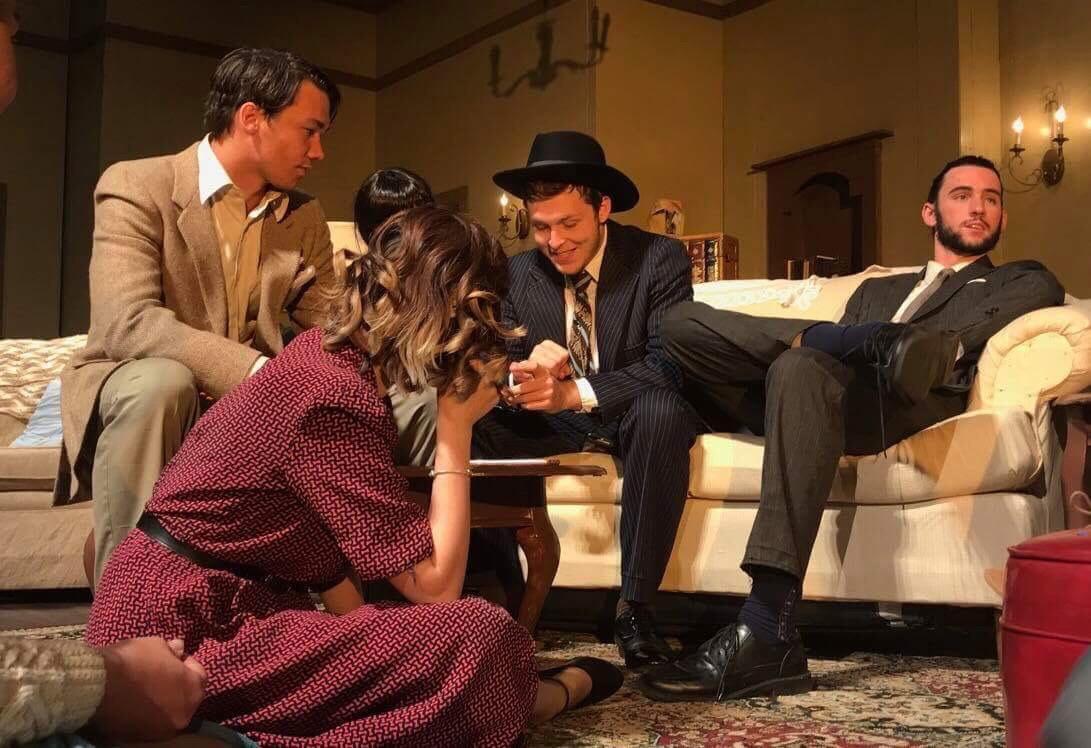 Grandma Kurnitz, played by Kaitlin Leonard, is a harsh, cruel, German woman who is stuck in her ways. Although Grandma has a rough exterior and a steel heart, she warms up slightly after Arty and Jay move in with her for those ten months. When Leonard described her character, she said that Grandma was “the epitome of tough love”.
“She’s definitely a product of her own experience,” said Leonard, who is studying both theatre and equine business at CF. “Her cruelty comes from a place of caring and protectiveness.”
Bella, played by Abigayle Anderson, lives with Grandma still at the age of 35. When Bella is not helping Grandma at the candy shop, she’s going to the movies as a temporary escape from home. While she has a childlike manner, she still is strong and stands up to her mother.
“Her breakdown is one of the most powerful scenes I might have seen ever in a play,” said Anderson, who is studying graphic design at CF. “If I saw Bella next to me, I would give her the biggest hug, because she deserves it.” 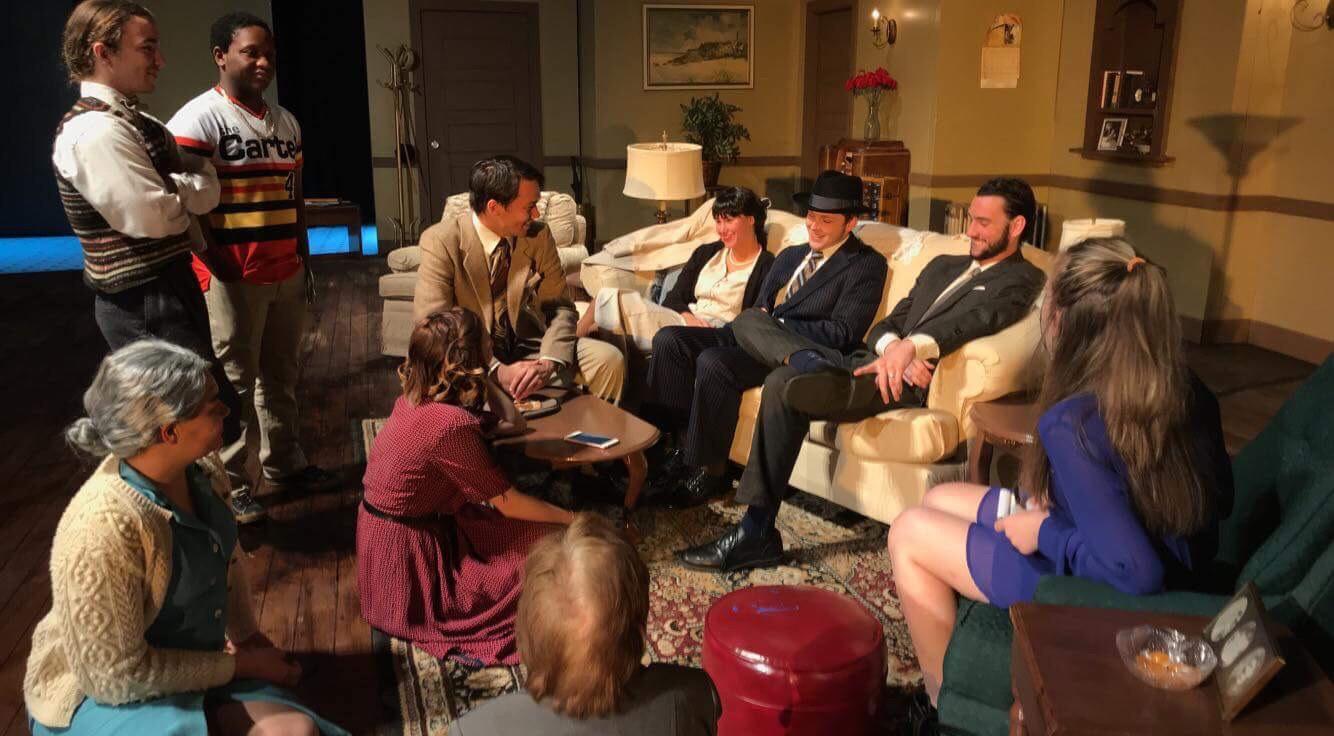 Louie, a mob man who is hiding out at his mother’s house, is described by Heath as a “true soul who is misguided in the way he does things.
“All he does on the inside is worry about where everybody else is and if they are okay,” said Heath, who is studying theatre at CF. “He’s very protective of Jay, Arty, and Bella.”
Gert, who is played by Meredith Ann Ginn, is described as “a crazy cat lady”. While she’s at Grandma’s house, she begins to lose her breath and cannot speak well in fear of Grandma. Ginn also describes her character as “a mess”.
“She has to portray herself in a such a way that makes it seem to everyone that she’s put together,” said Ginn, who’s studying psychology at CF. “She’s a mess, which really comes out when she talks, that’s why she doesn’t talk that much.”
During the intermission, part of the set was set up as a candy story with actual candy being sold to the audience. Dr. Kathleen R. Downs, director of “Lost in Yonkers” said that the idea came from the cast and crew and was approved by a dean. Not only was it a genius idea, but it made the set seem so much more real. 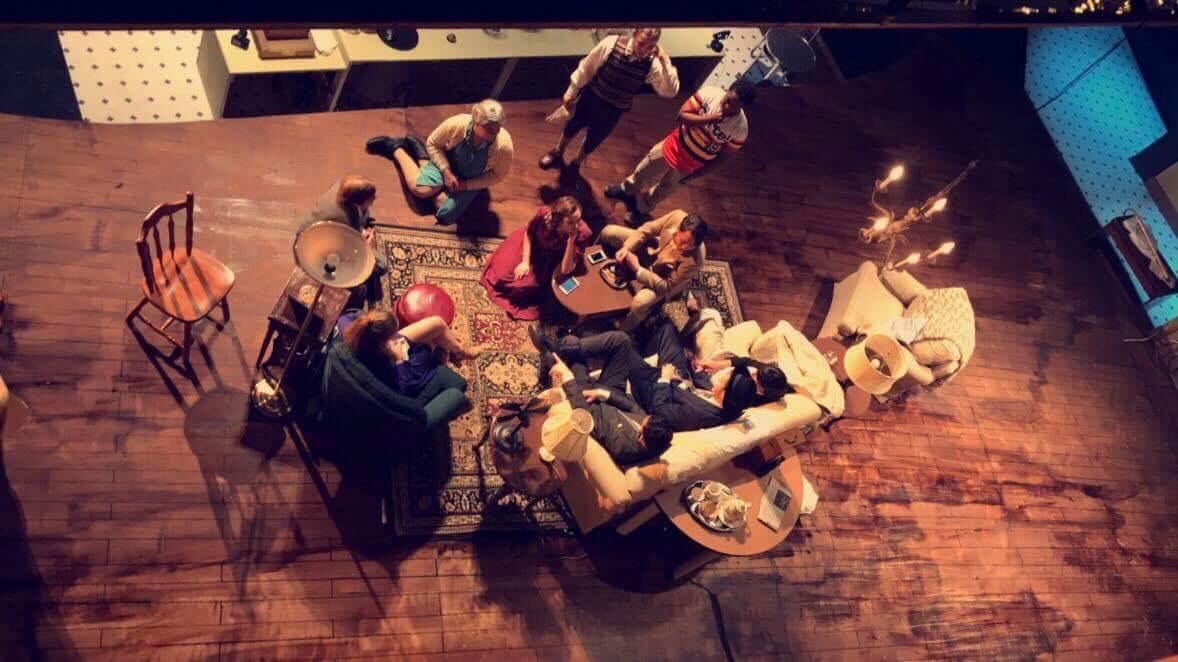 “The audience remembers all of this,” said Downs. “They remember Grandma. They remember what it was like when we had penny candy stores. Before the A/C. When Grandma makes you drink that soup.”
When asked about which character she related to the most, Downs said that she finds “bits and pieces” of the characters in her own extended, Irish family. Although few, she said that she knows a Grandma and a Bella in her family. While most of the cast could not relate to their own characters, they could relate somehow to another character.
The cast and director would like to make mention to the crew, for they were also a huge role in creating the show and the atmosphere. Sound crew, design, set, and understudies alike- they each made extreme efforts into the show. 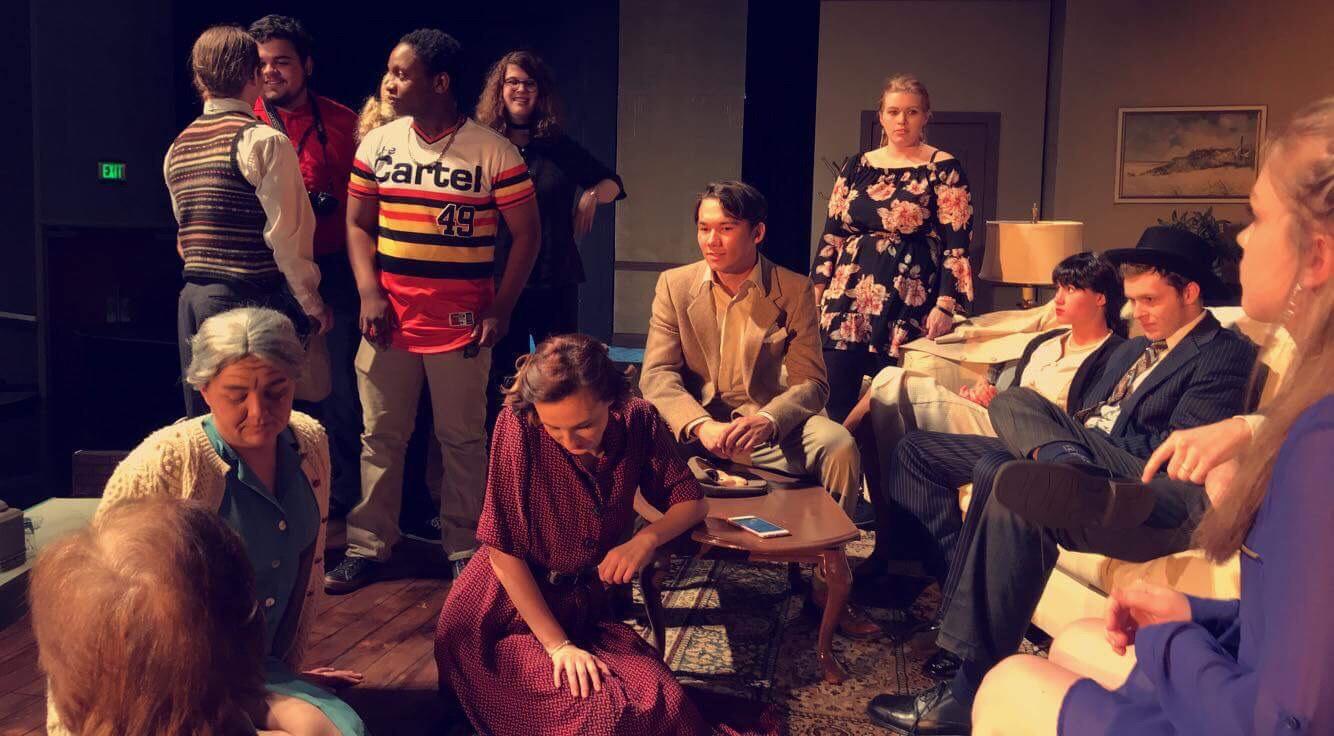 For set design and construction: Tyler Stentiford, Justin Heath, Joseph Martin, Trey Campfield, Faith Donahue, and SarahRose Zwolski. For sound, lighting, film, and photography: Frank Hinerman, Dakota Brown, SarahRose Zwolski, Megan Brown, and Adolfo Luis Benitez Otero.
For props and costume design: Hannah Parsons, Faith Elizabeth Donahue, Meredith Ginn, and Josh Ramko. Public Relations and stage managers include Mariah Meccia, Elizabeth Decker, and Dakota Brown. The three understudies include Michael Bones, Frank Hinerman, and SarahRose Zwolski.
The cast did a great job in portraying the characters and the message accompanying the show. The crew also did a great job in keeping the set, lights, et cetera in check. If anyone did miss the show, the cast wanted to portray this message, which is best explained by Coulson.
“Family is the most important thing you can do in your life,” said Coulson. “You’ll do anything for your family, and they’ll do it for you.”